SAPESI (South African Primary Education Support Initiative) is a section 21 company established in 2006 by business executives from both South Africa and Japan, to help improve the quality of primary education, specifically literacy, in South Africa. In 2008 a sister NGO, SAPESI Japan, was formed in Tokyo to raise funds in Japan for the sourcing and exportation of second-hand Mobile Library buses to South Africa.

In Japan municipalities are in charge of compulsory education. These offices utilise mobile libraries to take library services to the small schools that do not have their own schools libraries. Normally a mobile library is a two- to three-ton bus with a special library cabin equipped with bookshelves, carrying 2000 to 3000 books. 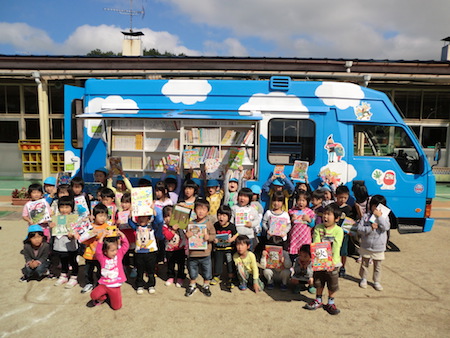 There are 530 mobile libraries in Japan and municipalities replace these vehicles with new ones after 14-16 years’ usage. Due to the small service areas of municipalities, the average mileages for these vehicles are only 20-60,000km at the time of replacement. The vehicles are in good condition and well-maintained as they are inspected every year in Japan. These second hand low-mileage buses are then donated to South Africa and shipped via the Durban port.

For the mobile libraries to operate effectively, there must be a close working relationship between SAPESI as the key organizer, the National as well as Provincial Departments of Education, sponsors and supporters.

To gain more professional and financial support for the project, the Mobile Library Advisory Panel was established in 2011, under the leadership of Jack Cohen. Other prominent South African businessmen have since become panel members.